On December 6, 2016 Nicky Smith, Stakeholder Relations Manager – West for Fortis informed Council that an LED conversion option for streetlights is available and being delivered across Alberta. The project is expected to last through the 2017 year, as as many as 85,000 lights are converted to Philips LED dark sky friendly bulbs across the province. The conversion doesn’t include Alberta Transportation managed street lights, or ornamental lights. Estimated energy savings following the conversion for the Town of Hinton amount to approximately 484,100 kWh/year. Following Smith's report, Hinton Town Council directed administration to accept the offer from Fortis Alberta to proceed with a streetlight assessment and LED conversion solution for the Town of Hinton.

The following information was provided by FortisAlberta

Why did FortisAlberta introduce an LED Conversion Streetlight Option?
FortisAlberta strives to meet the needs of its customers and in response to customer requests, the conversion option was introduced. The company is committed to improving the energy efficiency of its infrastructure, while controlling costs for our customers. We aim to be forward thinking to anticipate trends to better serve our customers.

Why did FortisAlberta change its lighting standards?
In response to customer requests and to improve the energy efficiency of our infrastructure, effective Jan. 1, 2016, FortisAlberta changed its standard for streetlights to Light Emitting Diode (LED) technology for all new construction and developed a conversion option for customers who wish to convert their existing streetlights from HPS (High Pressure Sodium) to LED fixtures.

What does LED mean?
In its simplest terms, a Light-Emitting Diode (LED) is an electronic component that emits light when an electric current is passed through it. The colour of the LED is obtained by adding a phosphorous material over the LED chip. LED streetlights are extremely energy efficient, do not produce any UV rays or infrared radiation, can be easily controlled, and have long life spans of more than 20 years. LED lighting provides an exceptional colour rendering index (CRI) of 70 or better.

What does HPS mean?
HPS (High Pressure Sodium) is a high intensity discharge lamp with an arc tube containing Sodium and Mercury, which when vaporized produces light. The Sodium radiation dominates the colour appearance of the light, which is characteristically a golden or yellow colour temperature of 2,100K. HPS streetlights have a poor colour rendering index between 20-21 when compared to LED and other types of lighting. 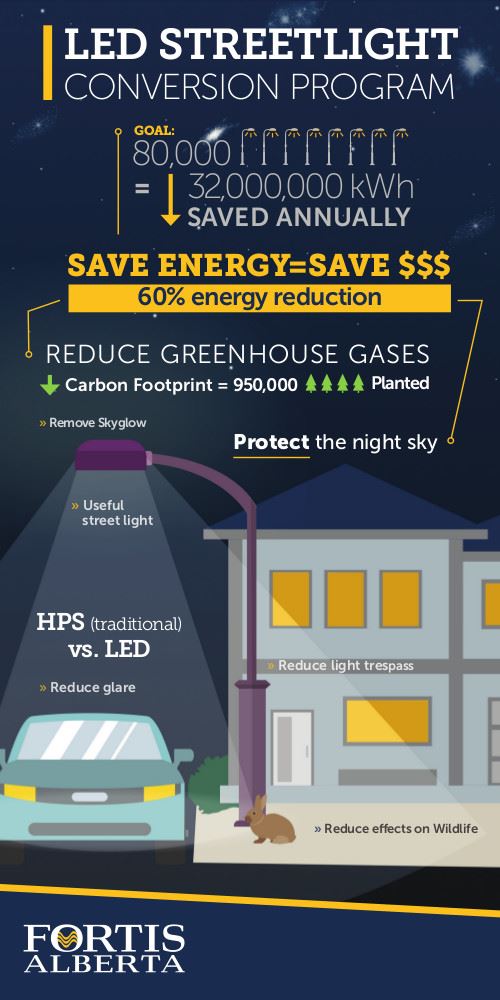 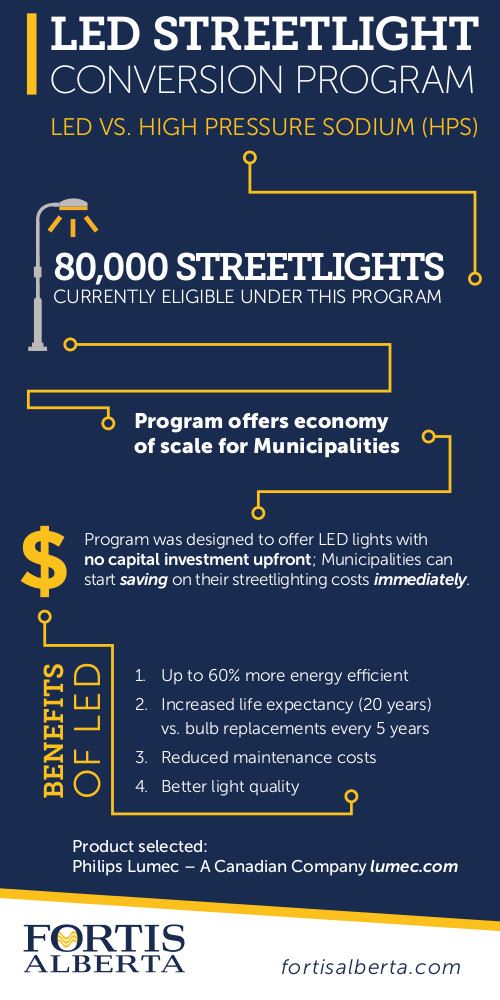 What does CRI mean?
Color Rendering Index (CRI), is a scale from 0 to 100 per cent indicating how accurate a given light source is able to reveal colours when compared to a reference or natural light sources. Generally speaking, the higher the numeric value or CRI is, the better the light source is at accurately rendering or displaying the color of an object.

Why did FortisAlberta change the colour temperature of their LED lights?
In Dec. 2016, new LED colour temperature products were made available by the approved streetlight manufactures and FortisAlberta’s assessment of the new products determined that the efficacy, environmental efficiency and price were comparable to the existing 4,000K standard. As a result, FortisAlberta has updated its standard from 4,000K to 3,000K. FortisAlberta is acting prudently to ensure it stays in-line with industry trends and consumer preferences while operating in the best interests of its customers.

Will the 3,000K LED lights make everything look orange like the old HPS lights?
No they will not. A colour temperature of 3,000K is slightly whiter than a typical incandescent bulb used in your home. The 3,000K LED lights also have much higher colour rendering (70) than HPS lights (20-21).

What are the benefits of converting to LED technology?
LED technology provides:
• more even and efficient distribution of light and better quality of light resulting in increased safety and security;
• reduced energy consumption resulting in energy savings and reduced greenhouse gas emissions; and
• reduced outages and longer light life spans resulting in reduced maintenance costs.

Why are municipalities switching to LEDs?
Municipalities around the world are switching to LED lights as a way to save both money and energy. LED lights have approximately 50 per cent lower energy consumption compared to their HPS luminaire predecessors. HPS lights, most installed in the mid-1980s, are at the end of their useful lives and need replacement. LEDs will provide better service reliability and lower maintenance costs. The new LEDs have a longer lifespan - about four times that of the bulbs we currently use. This translates into ongoing savings in maintenance costs as result of the extended maintenance cycle for bulb replacement. Less maintenance also means fewer service vehicle trips for repairs and as a result, reduced carbon emissions. 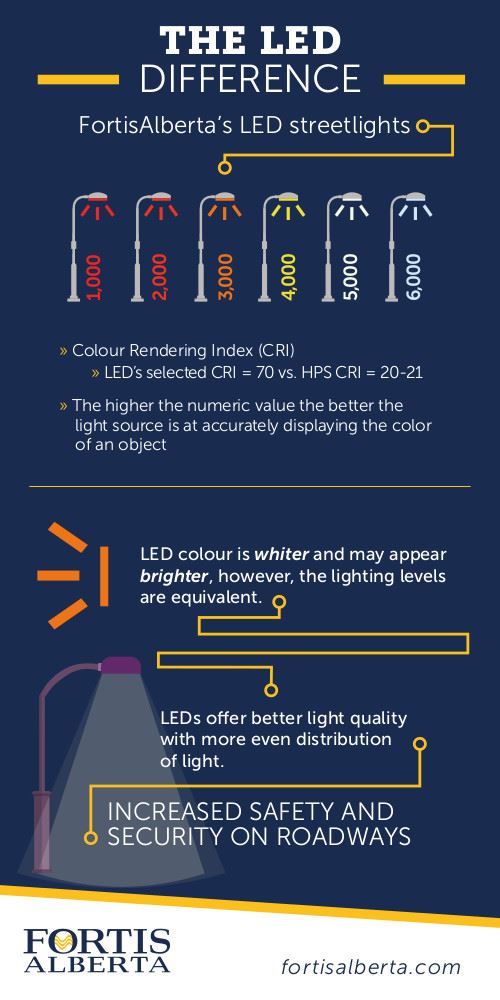 How much energy will communities save by using LED technology?
LED technology offers reduced monthly costs to our customers due to the lower wattage and reduced energy consumption. Approximately 50 per cent will be saved on the energy portion of municipal customers’ bills.

Will our community look different when our streetlights are converted to LEDs?
Yes, it will look different once the conversion is complete. The current high-pressure sodium bulbs produce a light that appears orange. The new LED lights will produce a whiter light. The result is a higher light quality that improves safety because of depth of field and peripheral vision enhancements without distorting colour.

By converting to LED fixtures, does that mean more light pollution?
Two factors have an impact to sky glow or light pollution, which are up-light and the lumen output (light level) of the fixture.
To address the up light, the majority of the new LEDs are “cobra-head” fixtures and they have received the best ranking – a “zero” – when it comes to the amount of up-light they produce. FortisAlberta’s fixtures are “Dark Sky” friendly with zero up-light, which means less light pollution and/or sky glow as the light is directed downward.

To address the lumen output, LEDs typically require approximately 47-58 per cent of the lumen output of the HPS light to achieve the same light levels on the pavement. This is due to the efficiency of the light source being able to direct the light where it needs to be versus the HPS light having a lot of wasted light and lack of control.

By eliminating the up light and reducing the lumen output of the light source, the LED significantly reduces light pollution.

Why do LEDs appear brighter? Are they?
No, these new lights are not brighter. However, the white light they produce does appear cleaner and brighter to the eye, which allows colours to seem more natural at night.

What is a BUG rating?
The term BUG relates to the following: Backlight, Uplight, and Glare ratings, which are used to evaluate the luminaires optical performance related to light trespass, sky glow, and high angle brightness control.

The rating for the zone is assigned a numeric value between zero and five. The lower the number, for example U0, the better the luminaire performs in these criteria. In this example, a value of zero for uplight means that zero light is emitted into the atmosphere.

Have the health impacts of the blue/white light associated with LEDs been considered?
Yes, the potential impacts were evaluated. The LED technology FortisAlberta is installing will use a warmer light, which means that exposure to blue light will be minimal. Additionally, the U.S. Department of Energy released a publication in 2013 and concluded that LED products are no more hazardous than other lighting technologies. Read it here

I’ve heard the new LEDs disrupt sleep patterns. Is that accurate?
There is no evidence that LED streetlights impact human sleep cycles any differently than HPS streetlights that have been used for the past 30 years. When considering the effects of light at night, indoor lighting is more of a concern. The quantity of light emitted by streetlights is many times lower than that emitted by typical indoor lighting, TVs, tablets or PC screens. The U.S. Department of Energy has published a number of documents to address the statements made by the American Medical Association (AMA) with regards to the stated health issues.
• The SSL Posting comments on the AMA statements of health issues. https://energy.gov/sites/prod/files/2016/06/f32/postings_06-21-16.pdf
• True colours, which explains the LEDs and the relationship between colour temperatures, colour rendering, optical safety, material degradation, and light-induced stimulation of human circadian functions (photobiological safety) https://www1.eere.energy.gov/buildings/ssl/pdfs/true-colours.pdf