The COVID-19 Pandemic event is the single largest challenge that the governments of Canada, Alberta, and indeed Hinton (though locally we may have experienced less impact than others) have experienced in generations. Juggling competing concerns of local stakeholders, internal employees safety, and efforts to protect residents and visitors to our facilities and general community has been and will continue to be a challenge that requires equally careful consideration and swift confident action as conditions may allow or call for.

Your leadership and Council have worked hard and continue to act in the best interest of this community. In the effort of a transparent auditing of our processes and decisions for future waves or events, Human Resources have carried out an internal survey and present the below to our residents and Hinton Town Council for your understanding and review.

With 29 respondents, assuming a population of 150 employees, and a standard target of 95% confidence, our margin of error represents +/-16%. At 16%, nearly all of the results attached will have some level of insight and representation of our population.

Chief Administrative Officer Emily Olsen and the Town of Hinton Senior Leadership Team would like to strongly impress the importance of our staff in the efficacy of our closures, staffing responses, interim programming, and reopening cycles.

Town of Hinton staff, whether they remained on staff through the entire first 6 months or saw temporary layoffs impact their plans, responded with a professionalism and dedication to the best of interest of our community that cannot go unnoted.

From boots on the ground operators up to executive roles, the response of our staff was exceptional. 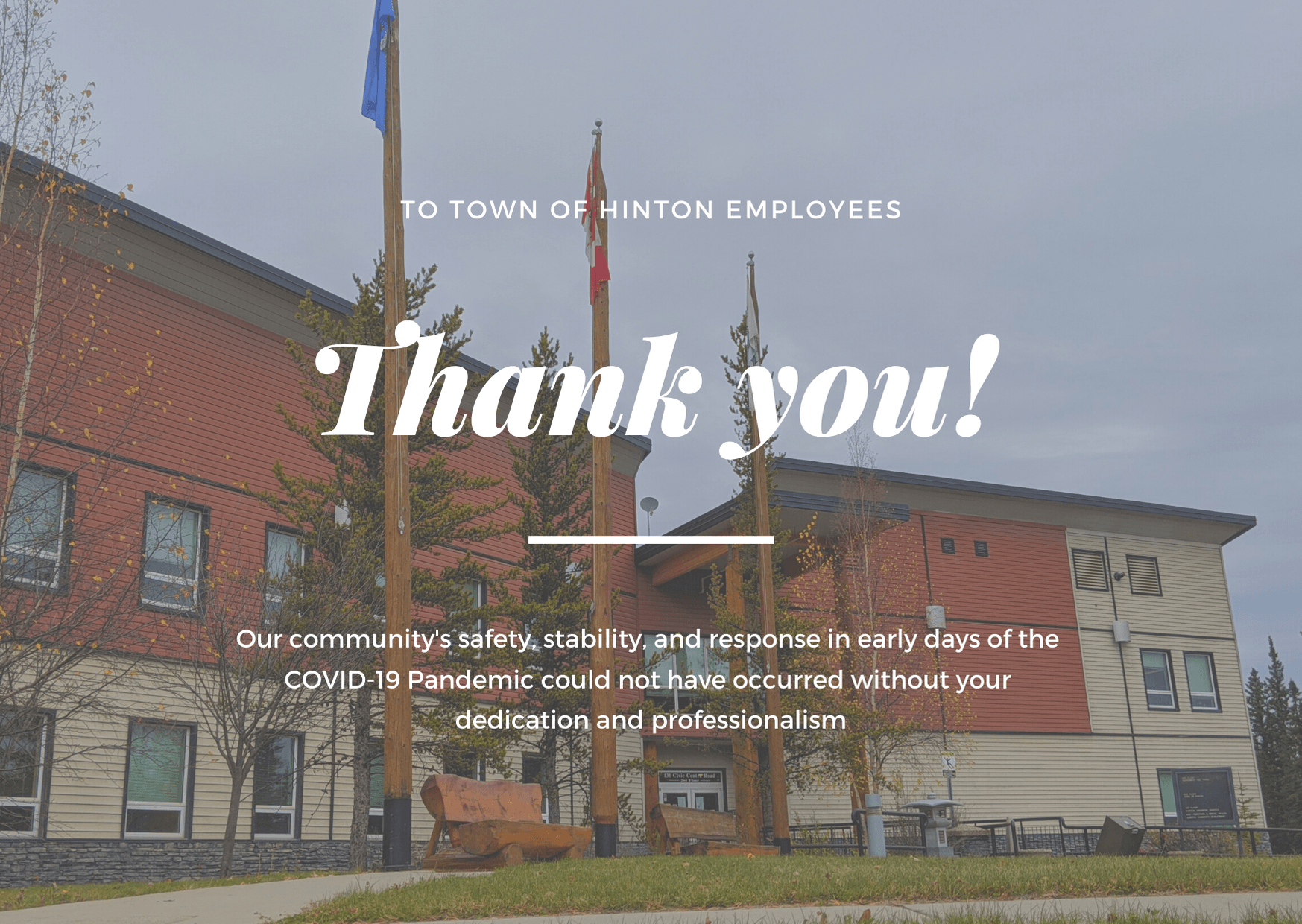 Overall, we conclude that Town of Hinton Employees consider the actions taken by the Town of Hinton on their behalf as positive, and that the Town prioritizes their safety. Staff appear to understand their roles, but most felt their workloads often exceed their ability. The majority of employees, approximately 92%, would describe their work as at minimum occasionally unmanageable, with 10% saying that their workload was rarely manageable. A similar percentage define themselves as unappreciated (10%) though the majority of staff felt positive regarding appreciation (58.6%). Most feel informed and productive  at home, though there is debate regarding needing the tools to work from home. Most employees would like to work sometimes, though 20% would like to never. For context, 6.9% spoke to wishing to always work from home.

For most of the respondents, there are three areas of concern. Employees are concerned about the potential of a second COVID wave and wanted more information on the Town’s plan to deal with a second wave. Several respondents expressed concern about coworkers not following social distancing protocol. Lastly, a few employees expressed concern about children going back to school and how they will be able to balance sick children (no childcare), work, and the potential of homeschooling.

Opinions regarding Town actions and information sharing were nearly unanimously positive, though each did receive some neutral responses (1 vs 5, 3.4% vs 17.2%). A single negative response was received regarding perceived care over health and safety, a single neutral, with 93% of responses positive.The HR Department received praise from several respondents for the support and information provided to the Organization. Many respondents wrote about the support provided by Health and Safety, but the reviews were mixed. Several people expressed the need for more “user friendly” SWPs.A few respondents were impressed with the Protective Services Department and wanted to recognize the hard work and support that department provided to the organization.

Thank You, and Moving Forward

Hinton Town Council and Senior Leadership team wish to reinforce their deep appreciation of the work of all Town of Hinton Employees during the first 6 months of this pandemic event.Insight from this engagement will  be implemented in future plans and strategies, and follow up steps agreed upon by SLT will follow.

72.4% feel productive at home, though opinions are split regarding the things needed to succeed from home. The minority feel strongly about staying at home – 6.9% always, 20.7% never. The majority would like to be from home sometimes, followed by rarely, followed by usually.

Respondents were impressed with support they received from the Town to work from home and/or at other offices. Several responses commended IT on the assistance provided. Some people who wanted to continue to work from home felt that additional support from the Town would be required but did not provide any specifics. Those who worked from home felt they were more productive with less interruptions but were leery of the social isolation which resulted.

A few employees expressed concern about children going back to school and how they will be able to balance sick children with no childcare, work, and the potential of home schooling. The vast majority felt that they would have no issues returning to the workforce, though 10% were certain they would.

It would appear all staff members know the contributions of their role to the organization and the expectations of them. Responses regarding receiving and seeking feedback were also positive.

The majority of respondents are from Community Services, followed by Corporate Services. Most employees who chose to take part are admin in office roles, while we did see 10% of respondents representing the temporarily laid off.